One of my favorite parts of vacation is simply waking up when you naturally do and then taking the morning at a relaxed pace.  So that is exactly what we did this morning.  We grabbed a light breakfast in the hotel and then took our time getting ready to venture out.  We decided to experience the city like city dwellers do and bought a couple metro passes.  We took the subway to the Le Plateau – Mont Royal neighborhood.  Whereas Old Montreal feels European and the Little Burgundy neighborhood felt a bit like Logan Square in Chicago, Le Plateau felt a lot like Bucktown in Chicago but with a lot of French woven into the shop signs and the overheard conversations on the street.

Our first stop in the neighborhood was for a more substantial breakfast at St. Viateur Bagel & Cafe.  I had heard a lot about Montreal bagels prior to coming here and this shop specifically was recommended to me by a coworker.  It did not disappoint!  Montreal bagels differ from New York style bagels by being smaller, thinner, sweeter and baked in a wood-fired oven.  Joe got a classic bagel sandwich with cream cheese, lox, tomato, capers and onions and I opted for simply a whole wheat bagel with chive cream cheese.  Every morning for the rest of the trip, it will be a tough decision between a french croissant and a montreal bagel! 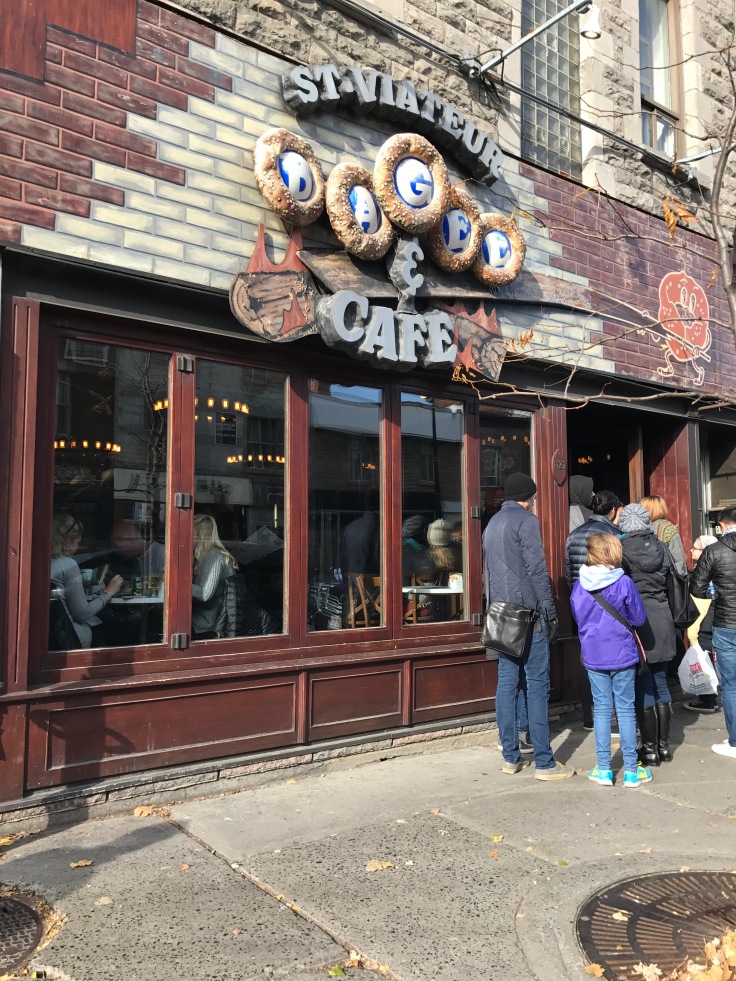 Once we finished at St Viateur, we walked down avenue du Mont-Royal and caught a bus to the Parc du Mont Royal.  This park was enormous and was at the top of a small mountain.  We spent the next couple hours hiking through the park and taking in the views of the city from Mont Royal.  Like yesterday, the weather wasn’t too chilly until the wind started blowing.

Once we were sufficiently tired and chilled from the hiking, we caught the bus back down to the Le Plateau-Mont Royal neighborhood.  We walked around a bit more and were planning to go to Schwartz’s Deli for some smoked meat, a signature Montreal food we learned of while here.  To none-deli connoisseurs (like me), smoked meat is very similar to corned beef or pastrami.  To the connoisseurs, I’m sure there are very important differences between each.  Schwartz’s Deli was specifically recommended to us by a Canadian friend.  We got to the deli around 3:00 and figured that would be a great off-peak time to grab a sandwich.  We were surprised to see a line out the door and down the block.  It was quite windy at this point and we were ready to warm up, so standing in a long line did not appeal to either Joe or me.  So instead we back-tracked to a ramen restaurant we passed on our way.  I realize ramen is neither Canadian nor French, but it is one of both Joe’s and my favorite foods and was perfect for our circumstance as we had worked up an appetite hiking and were looking to warm up!  The ramen was hearty and just what we were in the mood for. 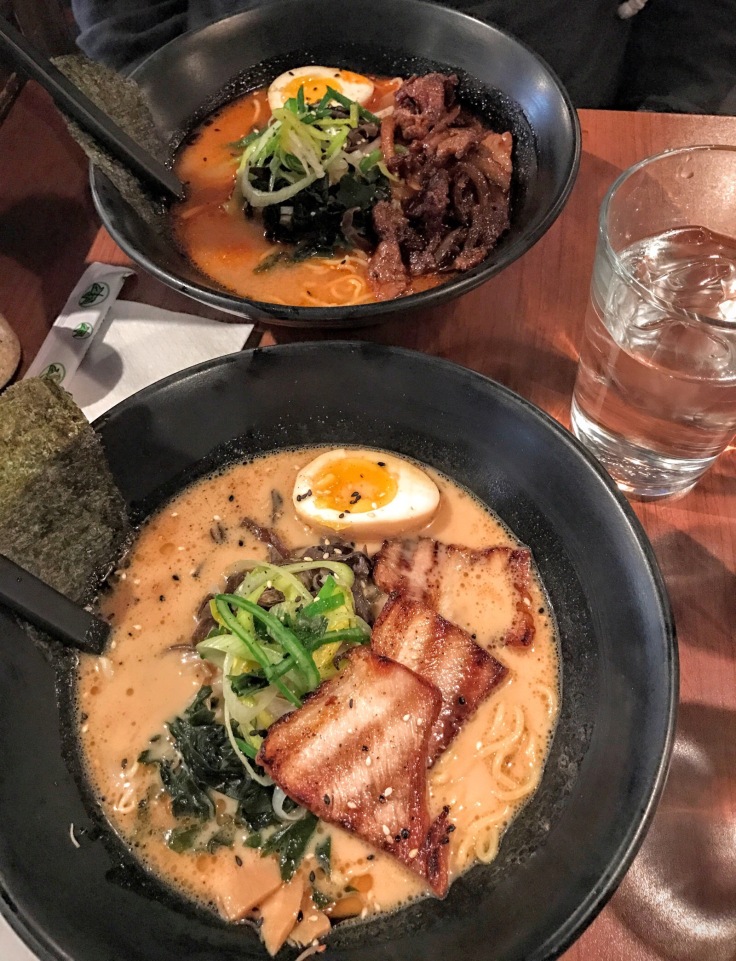 After filling up on ramen, we took the bus back to our hotel for a rest – another one of my favorite parts of vacation.  As the evening began, neither Joe nor I were up for a lot of food or activity.  But we still wanted to do something Canadian.  And neither of us had gotten the craving for smoked meat out of our minds (we will probably attempt Schwartz’s deli again before we leave).  So we found a sports bar in the neighborhood where we watched the Montreal Canadians beat the Detroit Redwings in hockey and we enjoyed a smoked meat and arugula flatbread for dinner.  The meat was rich and flavorful, and the grilled bread and arugula kept the dish light. 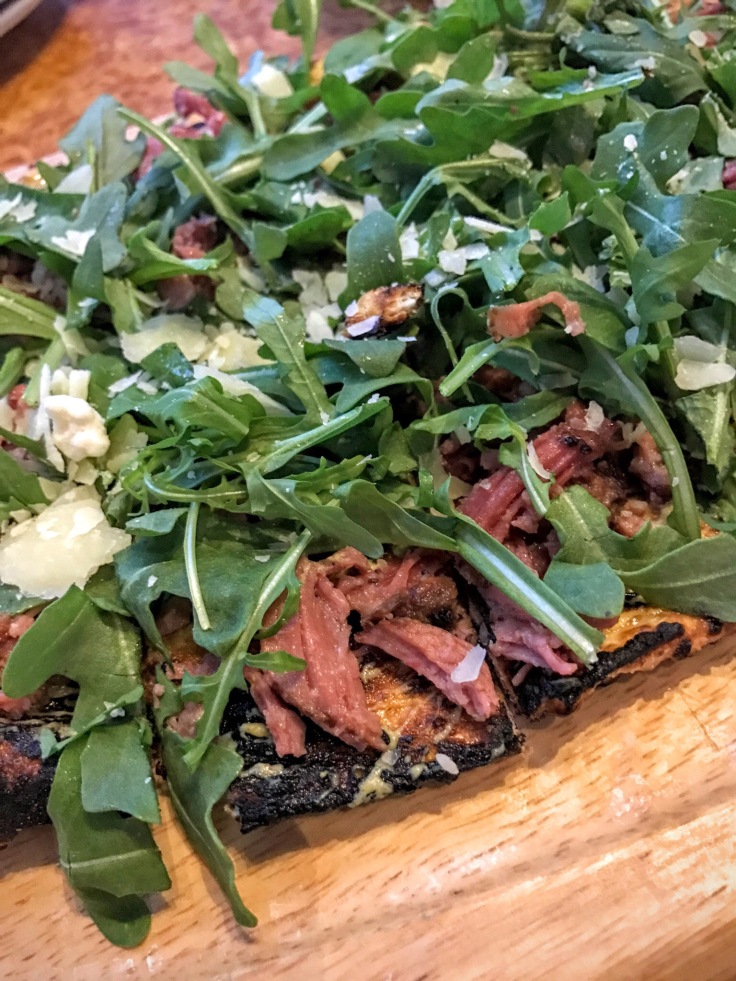 Today was another successful day of exploring and eating our way through Montreal.  Tomorrow I have got my eye on finally trying some authentic poutine!

One thought on “Montreal: Day 2”